In this week’s episode of Fair Pay for Every Play with Utopia Music, host Kristian Luoma is joined by Tony Van Veen to discuss the relationship between independent musicians and streaming services. Whilst studying at college, Tony was first introduced to the world of DIY music and once he had a taste for it, he knew that was the career he wanted to pursue. Now, he is the CEO of DIY Media Group; a collective of innovative companies aiming to make it easier for creators to distribute and monetise their work. 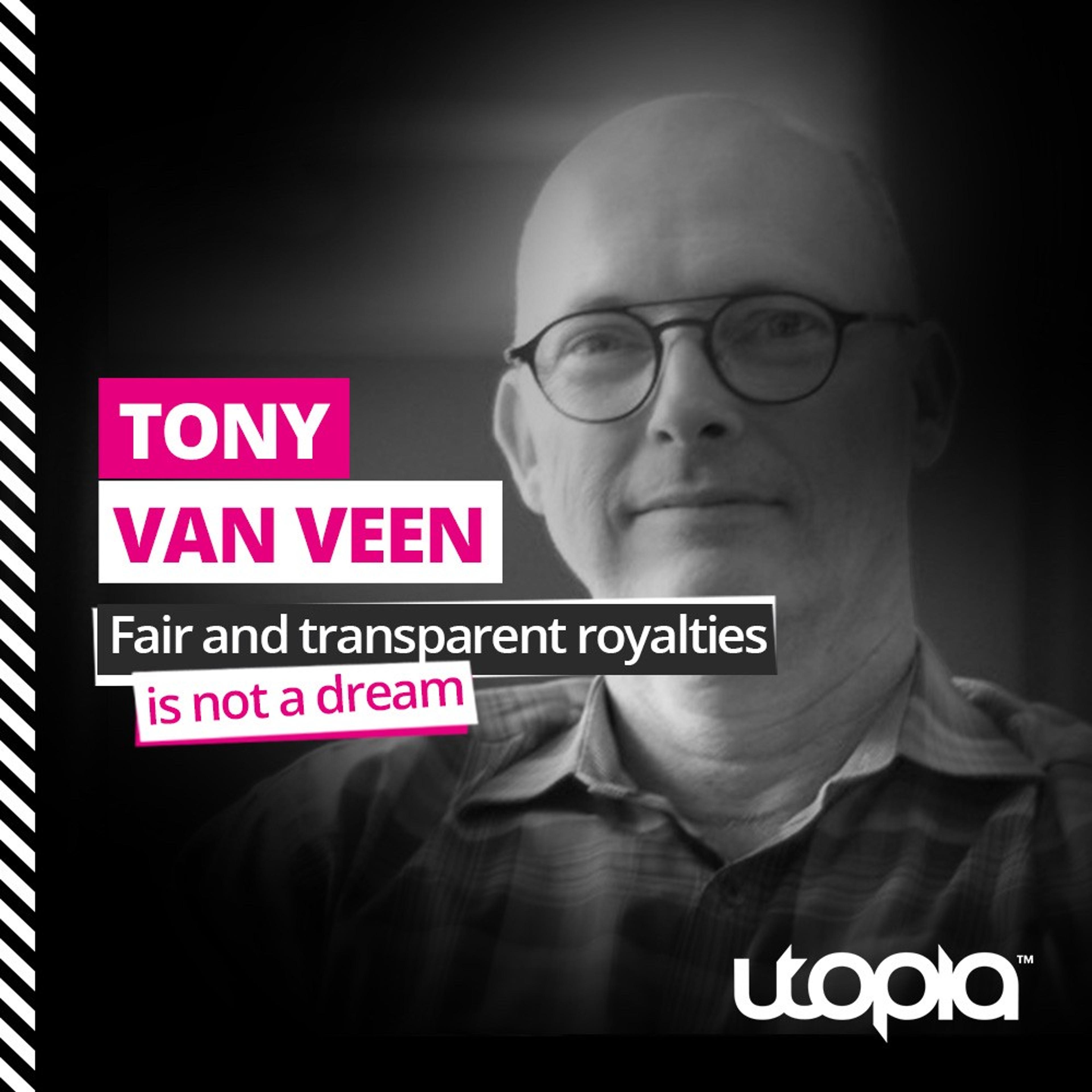 “I grew up in Aruba in the Caribbean, and I came to the US to go to business school. I happened to be in my college dorm and became friends with a couple of guys who were into the hardcore punk scene, and they invited me to go to one of the concerts. It was an awful racket. You know, the noise was so loud and ugly, but I met some cool kids and so next week they invited me again. After a few times, my ears got used to it and then, I had some friends who were like, “Hey, let’s start a band!”

It was only when he found himself in a band, that Tony learned to play music. He describes playing and releasing music as being “mind-expanding” and fell in love with being a part of an energising culture.

Today, the independent music sector is growing faster than mainstream music labels. Thanks to digital innovation, artists less frequently have to rely on luck to break through in a big way. The main reason for this is that artists can now manage their production and distribution themselves.

Access to high quality recording and distribution is affordable and instant; you can reach billions of people quickly. However, the monetisation is low and almost impossible to solely survive on. This could change if fair pay were in place for every play and ways to achieve this are discussed by Tony and Kristian.

Timeline: *I imagine this will need amending when we get the intro in?*

00:00 — Introduction to Tony Van Veen, and why he is interested specifically in working with independent artists

02:36 — The challenges that independent artists face today in relation to streaming

04:00 — Dissecting the model of the subscription service

15:11 — Tony’s hope for the future of independent artists

Protests for a penny a play vs. physical purchase

Streaming has dramatically shifted the economics of the music industry. Before streaming, a music consumer would make a one-time purchase of a physical product, say a CD or even a download, and be able to enjoy as many listens as they wanted. Today, the more popular option is to stream music, usually using a service that a music consumer can subscribe to. This provides compensation for artists over a lifetime.

However, the royalty that an artist receives per stream is argued widely to be unfair and there were recent protests for a penny a play towards popular streaming site, Spotify. Tony suggests that to achieve this, Spotify would need to change their model; though doing so would run the risk of losing subscribers and fewer royalties being collected.

“There is not enough being charged in [Spotify’s] subscription fees to music fans. The way for them to pay more per stream is to raise what they charge to music consumers. They could do that in two ways. For starters, eliminate ad-supported streaming. Apple Music doesn’t have ad-supported streaming and came out a few weeks ago with a report that says they are technically already paying a penny per stream…

“The second way that you can do it is to raise your rates. The question is if you get rid of the ad-supported streams and on top of that you raise your subscription from $10 a month to $30 a month, how many music listeners would Spotify lose?”

Visibility, discoverability, and your ability to earn more royalties

Tony believes that independent artists do not benefit all that much monetarily from being discovered on a streaming site, though this does often lead to an expansion of fandom. From his experience, he says that streams mostly derive from supporters of the artist being driven to streaming platforms from the artist themselves and their social media.

He describes modern fan relationships with independent artists as being more conversational and personable.

“I feel to an extent that independent artists are driving their own traffic of fans to their own streams through their social media activities and through their fan bases that they create and nurture.”

However, he is able to give tips for independent artists to improve their discoverability. First, they need to ensure their metadata is correct to allow yourself to be visible and searchable. They also need to ensure that releases are all linked in one place so that listeners can explore.

“I think planning a set release date is important for independent artists. The average independent artist is always late and they’re always anxious to get their music out as quickly as possible. They upload it to a distributor and as soon as it’s delivered, they’ll want it to go live. Then what will happen is it will go live on a different date to each platform. In the industry, typically songs are released on a Friday. All the algorithmic recommendation playlists come out on a Friday.

“If you schedule your release date three weeks ahead, it allows your songs to be featured on the release radar and increase your likelihood of music being delivered to fans and potential fans.”

Sync licensing and increasing your odds

Sync licensing is like playing a lottery ticket; there are no guarantees. However, you can significantly increase your chances of coming out with a deal. Tony explains that there are boutique sync libraries for specific genres and purposes and there are larger library databases that you can contribute to via distributors like CD Baby.

“The key to getting any kind of sync plays is somehow getting your music into a sync library. There are boutique sync libraries that are carefully curated. Usually, you need to do some research, figure out who they are, submit your music, and hope that they like it.”

For the best chances, Tony suggests submitting instrumental versions of tracks or shorter snippets, as these may match more closely with what a music supervisor is looking for. As a parting gift, he recommends Taxi.com.

“Taxi is a songwriter’s organisation that acts as a bit of a filter. They get major record labels, movie producers, and send them their listings. Then they will message their songwriters like “this label is looking for this kind of song for this kind of artist.” And then their members can submit music and taxi does like a first-level screening before forwarding on what they think matches the list.”